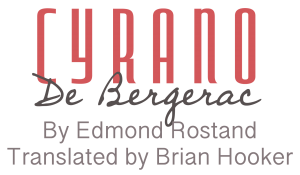 Directed and Adapted by Judith Allen

A sophisticated turn of phrase ... or ... a pretty face? Which will Roxanne choose?

Larger than life Cyrano ‒ soldier, philosopher, poet and adventurer ‒ is in love with the resplendent Roxane. Hampered by his self-perceived lack of beauty due to his absurdly large nose, Cyrano offers handsome fellow cadet, Christian, his poetic mastery of language to woo his beloved Roxanne. As she falls under the spell of Cyrano’s beautiful letters, believing they are coming from Christian’s beautiful face, war propels the love triangle beyond whimsical antics into love and heartbreak. Full of wordplay and swordplay, as well as the most famous nose in history, Cyrano is a night of comedy, mistaken identity and romantic tragedy under the stars. Walk in, bike in or drive in! Featuring nightly food trucks.

“Was this the nose that launched a thousand ships and burned the topless towers of Ilium?” ‒ Cyrano de Bergerac

Poet and swordsman Cyrano de Bergerac has one demoralizing flaw. He believes his overly large nose is a disfigurement that prevents any woman from loving him, specifically his beautiful young cousin, Roxane, whom he loves deeply. One day, Roxane surprises Cyrano by begging his protection and friendship for a young man she has seen at the theater and fallen in love with.

New Gascon cadet Christian returns Roxane’s feelings but admits he finds himself inadequate when expressing his feelings for a woman , in words. Smothering his own heart, Cyrano schemes to write love letters to Roxane and allow Christian to claim them as his own.

One evening, Christian decides to woo Roxane without Cyrano. The harder he tries, however, the worse the wooing goes until Roxane rejects him. Keeping hidden in the shadows, Cyrano takes over the courtship, speaking of all the love and longing he has kept inside. Believing it is still Christian speaking, Roxane falls deeply in love. Suddenly threatened with unwanted advances from the powerful Comte de Guiche, Roxane, Christian and Cyrano trick a monk into marrying the lovers.  In a jealous rage, de Guiche orders Christian and Cyrano’s company to war that very night.

At war, Cyrano daily risks his life to send letters Roxane, pretending they are from Christian. When Roxane recklessly joins her husband on the front, Christian realizes the depth of love Cyrano possesses for Roxane. He begs Cyrano to tell Roxane the truth and have her choose which one she truly loves. Before Cyrano can reveal his heart to Roxane however, Christian is killed.  Cyrano hides a last letter on Christian’s body for Roxane to find, swearing never to reveal the secret.

Fifteen years pass. Roxane has retired to a convent. On his weekly visit, Roxane consents to Cyrano reading Christian’s last letter. When he reads aloud, Roxane realizes Cyrano knows the contents of the letter by heart and his voice is the voice she heard under her balcony all those years ago. Roxane has only ever loved one man in her life and he is here. As she confesses her love for Cyrano he collapses, mortally wounded in an ambush on his way to see her. Cyrano dies in her arms, knowing Roxane has accepted his love. 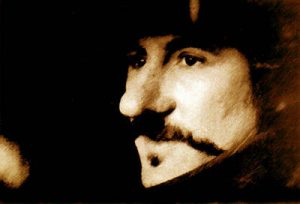 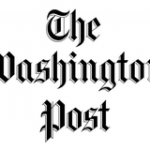 “Cyrano the man and "Cyrano" the play are romantic to the core: romantic in the grand manner rather than in the simpering Hollywood style.” - Washington Post 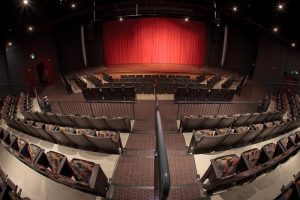 This production takes place outside in the Park at Columbine Health Systems. Pack your blankets and chairs and head on over! Feel free to pack a picnic dinner or prepare to enjoy food from one of our nightly food trucks. Packed adult beverages are okay too (if you are over 21)! Address: Centre Ave & Worthington Circle

OpenStage will be staying up to date and abiding by the restrictions and guidelines that the state and county provide for the safety of the audience and the artists. You will receive an email before the performance detailing the protocol for the show. Protocols are subject to change at any time.

Edmond Eugène Joseph Alexis Rostand was born on 1st April 1868 in Marseilles, the eldest child and only son of a prosperous and cultured family. After a happy childhood and education at the lycée de Marseilles, Edmond moved to Paris to take his baccalaureate and to study for his law degree. But he was determined to be a poet and never practised law.

Staying on in Paris after his studies, the would-be poet had at first little success. His first book of poems, Les Musardises (1890), only sold 30 copies. But he did meet Rosemonde Gérard, who also wrote poetry, and whom he married in 1890. An early attempt to write in prose for the theatre: a farce, Le Gant rouge, written with Rosemonde’s step-brother and performed at the Cluny Theatre in 1888, also failed to please. But Rostand did have a talent for the theatre and when in 1894 the Comédie-Française put on Rostand’s first verse play, Les Romanesques, as part of a triple bill, it was a great success. A lighthearted treatment of the Romeo and Juliet story with a happy ending. (The success of Les Romanesques continues to this day in the form of the musical, The Fantasticks.)The amazing success of Cyrano de Bergerac at its premiere on December 28, 1897 was a triumph. Rostand’s dream of reviving national pride with his hero’s heroism, wit and typically French panache was an unparalleled success.

Since then, Rostand’s play has travelled all over the world and has been translated into almost every language. Cyrano de Bergerac has been translated to operas, musicals, films, parodies and ballets. The romanticism of Cyrano along with his courage, integrity and all out panache continue to touch and inspire audiences to this day. 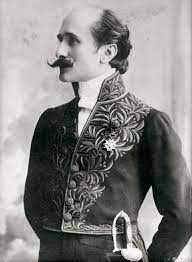