Meet the Cast of ‘The Crucible’: Timothy Ackerman 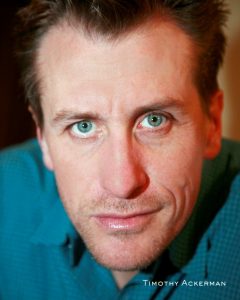 Timothy plays John Proctor, a man with strong values of work, family, honor. All he wants is the simple life of raising his children and working his farm in peace. He doesn't fit into the religious mold of the society he lives in, and he is caught up by his spontaneous desires without seeing how these actions might hurt his family until it’s far too late.

Timothy most recently appeared with OpenStage as Lee in True West (2015, directed by Sydney Parks Smith), for which he won the OpenStage OPUS Award for Outstanding Actor in a Leading Role. Previous roles include Howie in Rabbit Hole with Bas Bleu Theatre; John Seward in Dracula with Front Range Community College; The Book of Liz, Rosencrantz and Guildenstern Are Dead and A Perfect Ganesh with OpenStage Theatre; and The Shape of Things and True West (2007; OPUS Award for Outstanding Actor) with OpenStage Etcetera. Timothy recently appeared in the Netflix Original Documentary, Casting JonBenet, winner of the 2017 Australian Academy Awards. He has performed on stages in Wisconsin, California, Illinois and Texas. Timothy holds a Bachelors in Theatre Arts from Carroll University. He dedicates this performance to his beautiful, amazing sons, Devin and Luka.