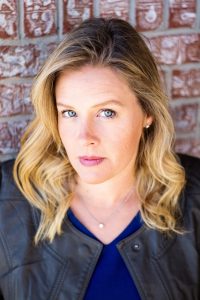 "With a heart as big as her hair, Truvy is the best friend you always wished you had. Whatever emotion you’re feelin’...it’s her favorite." -Jessica Emerling Crow

Jessica is thrilled to be performing again with OpenStage Theatre, having appeared with the Company as Emily Brent in And Then There Were None (OpenStage Opus Award/Best Supporting Actress), Genevra in Bright Ideas,Rosemary in Outside Mullingar (OpenStage OPUS/Best Actress), Karen in Unnecessary Farce, Madame de Volanges in Dangerous Liaisons (OPUS/Best Supporting Actress) and Clara in 33 Variations. Outside of OpenStage, favorite roles include Kelly in Chaim's Love Song, Rita in Prelude to a Kiss, Annelle in Steel Magnolias and Rosaline in Love's Labor's Lost. Jessica is also the host of a weekly podcast, Boys Built Better. She would like to thank her husband Robert for putting her three boys to bed all those nights she was at rehearsal, and to Debbie for the opportunity to be part of such a great cast.