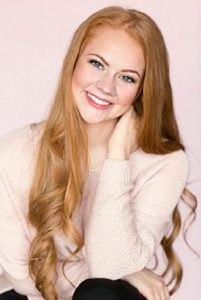 "Annelle is a shy but determined new employee at Truvy’s hair salon. Although being as naive and soft as she is, Annelle also goes through many stages and is just as much 'steel' as the rest of the women!" -Kathleen Wright

Kathleen discovered her passion for acting at age seven with her first role as an urchin in Oliver Twist. Since then, she has appeared in over twenty-five productions including her favorite role as Jan in West Side Story. Kathleen is currently pursuing her degree at Colorado State University where she has performed as Betty Dulfleet in The Resistable Rise of Arturo Ui, and in Love and Information and Urinetown: The Musical. Most recently, she played Thyona in Big Love. In addition, Kathleen has competed at the Kennedy Center American College Theater Festival in Spokane, Washington, where she partnered with a finalist in the Irene Ryan acting competition. She hopes to spread her love of theatre to children after she graduates from CSU. Steel Magnolias marks Kathleen’s first time working with OpenStage, and she is honored to be in this production and learn from the wealth of theatrical experience in the cast. She wishes to thank OpenStage Theatre the opportunity.