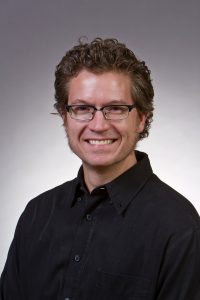 "Directing Fool for Love has been a delightful challenge.  The material is rich and endlessly engaging, and I was lucky enough to get four actors who have brought these characters to life with ferocity and aplomb.  I am excited to see how they continue to grow into the roles and where the journey takes them." - James Burns

James graduated from Colorado State University with a degree in Theatre Arts in 1997. He worked at the Arvada Center during the 2000, 2001 and 2002 seasons as a scenic painter and technician before moving to New York City. He stage managed On Love and Lies and Square One at the 2004 Edinburgh Fringe Festival, and Box of Fools for the 2005 American Living Room Festival in NYC. Since moving back to Fort Collins in 2010, James has worked extensively with both OpenStage Theatre and Bas Bleu as an actor, fight choreographer and scenic artist. He appeared onstage most recently as Phillip Lombard in And Then There Were None, Steve Heidebrecht in August: Osage County, Petruchio in The Taming of the Shrew, The Husband in Stage Kiss, Austin in True West and Sharky in The Seafarer, all with OpenStage Theatre. In addition, James recently directed and created content for OpenStage’s Etcetera production of Christmas Chaos. He sends thanks to his wife, Jessica and love to his daughters, Scarlett and Sterling.