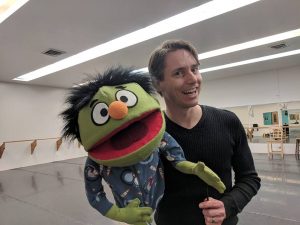 Ever wonder what it would be like to act.... with a puppet?? Meet Bas who is playing Nicky and Bad Idea Bear! Bas is no stranger to theatre with credits from OpenStage to Tilburg University in the Netherlands! Now Bas is embarking on a new adventure with OpenStage's 'Avenue Q' this season and shares his journey with us!

Bas, why did you want to be involved in this production?

The way I describe the show to people is “Sesame Street for adults”. Having very fond memories of watching Sesame Street growing up (and doing Ernie impressions for way too long), I thought it was a unique opportunity to step into that world without having to sing about ABC’s.

What do you do when you’re not doing theatre?

I work as a software engineer at Otter Products (parent company of OtterBox and LifeProof), and love to spend time with my family. My one-year-old daughter is already familiar with Sesame Street and gives me a great excuse to watch it again with her.

What’s challenging about bringing this script to life?

Even though we’re working with puppets (there’s a few human characters in the show as well), their personas have emotions, hopes, and dreams like any other character you bring to life. It’s great to focus on the songs and the jokes, but they all mean more if you can give life to these puppets. The show has a lot of heart to it.

What has your experience been like working with a puppet?

It’s been a great experience, although it’s physically more challenging than I anticipated. There’s so much more to consider than having a puppet look in a direction and moving its mouth. How can you make them look alive and show their personalities? Fortunately, we have some experienced puppeteers who are coaching us in the process.

Without giving anything away, what’s your favorite line of dialogue?

There’s a few, but “who put my earmuffs on the cookie” is definitely a favorite.

Is there anything else you would like to say about the show/process/etc?

Avenue Q only recently announced it’s closing in New York after 15 years (six on Broadway, nine Off Broadway). They will actually close the day after our show closes. Having been around for so long, it goes to show that this musical is so much more than “Sesame Street for adults”. It has great music and whit, but also has a big heart. The characters are very relatable and struggle with real issues like finding a job, love, and purpose. I imagine people would still fall in love this show in another 15 years.

Music and Lyrics by Jeff Marx and Robert Lopez

Winner of the 2004 Tony Award “Triple Crown” (Best Score, Best Book, Best Musical) Avenue Q is part flesh, part puppet, and packed with heart. This laugh-out-loud musical tells the story of a bright-eyed college grad who goes to New York City with big dreams and a tiny bank account.  Moving to the only place he can afford - all the way out on Avenue Q - he meets an odd assortment of offbeat friends who struggle to find jobs, dates, and an ever-elusive purpose in life. Filled with gut-busting humor, biting satire, and a delightfully catchy score, Avenue Q is likely the most irreverent musical you’ll ever see. Mature audiences only due to language and sexual humor.

Adults love AVENUE Q, but they seem a little, er, fuzzy on whether it's appropriate for kids. We'll try to clear that up. AVENUE Q is great for teenagers because it's about real life. It may not be appropriate for young children because AVENUE Q addresses issues like sex, drinking, and surfing the web for porn. It's hard to say what exact age is right to see AVENUE Q - parents should use their discretion based on the maturity level of their children. But we promise you this - if you DO bring your teenagers to AVENUE Q, they'll think you're really cool. 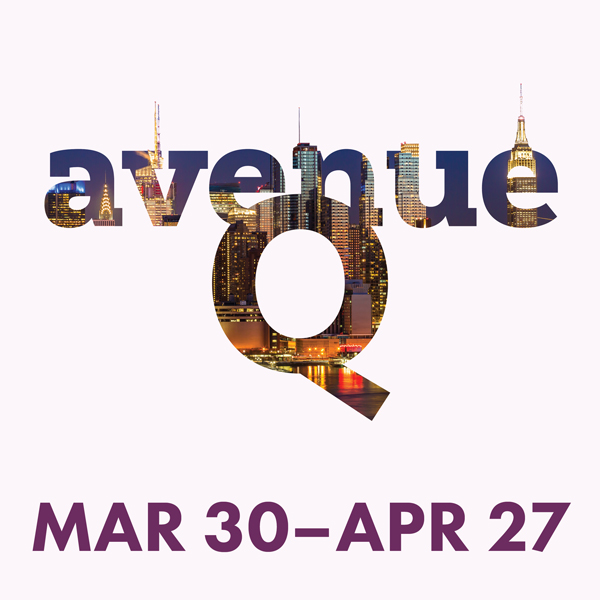