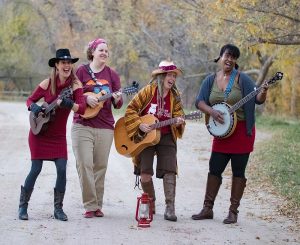 Lois and the Lantern brings Original Music to Sherwood

OpenStage’s production of Ken Ludwig’s Sherwood: The Adventures of Robin Hood features original music and an opening night pre-show concert from the band Lois and the Lantern. With their story-driven lyrics, sublime harmonies, dynamic string instrumentation, Lois and the Lantern is the perfect addition to the world of Sherwood! This week I had the pleasure of interviewing three out of four band members, Saja, Theresa, and Mary, to learn more about their music in Sherwood and their upcoming album.

What has your creative process been like - both writing songs for Sherwood and for your upcoming album?

“All of our songs are ones that we, because we have been practicing and know each other, are unbelievably updated reiterations of what we have done before,” Saja said. “We released an EP in 2017 which was like your first read into the band, but now that we’ve polished ourselves—we’ve gone through festivals, we’ve gone through performances—you’re gonna find songs on this album that we’ve tightened up and are better just through experience.”

Theresa continued, “I feel like we’ve grown up a lot when it comes to songwriting. We write individually as far as lyrics and melodies, but then we meet up and just kind of congeal that and make it into a song as a band. I feel like that has matured a lot over the years. In the beginning, we just didn’t know each other as well. Now it’s like, if Saja writes a song, I already have an innate sense of ‘this is where she wants harmony’ and ‘this is what the guitar should do’. It’s more of a shared process now.”

“A band is like a relationship. You’ve gotta be vulnerable and accept the vulnerability,” Saja concluded.

Is there anything specific about Sherwood that inspired you to create music?

“We already write songs that are inspired by nature and relationships, and, you know, our place in the world. I feel like those are really central themes to [Sherwood] so it was really easy, well maybe not easy, but it just made sense to go through and say ‘We need a song that feels like this emotion in this scene. Do we have a song like that?’. That was pretty cool. I feel like we’re a good fit for this kind of a show,” Theresa said.

Mary offered a similar opinion: “What I think about with this project for us in particular is that we all write songs with emotions behind them if you know what I mean. We can look through the script and see that we need something romantic, and then go through our songs and find something that works perfectly...It was fun to match the stories of our songs to the story of the play.”

About “The Bargain,” an original song written for Sherwood

“We did write a theme song specifically for the play,” Theresa said.

“She wrote it.” Saja interjected, “She’s an amazing lyricist. Theresa is our strongest songwriter, she knows how to write a story well. She wrote the main song here, which is ‘The Bargain’.”

“There was one quote in the play that stood out to me that seemed to be the crux of what it was about, so that is what inspired The Bargain,” Theresa said.

The quote in question:

"They follow me. I follow them. We travel together. That’s the bargain we make in life. We’re here for each other. Rich, poor, English, foreign. That’s our bargain for living. Otherwise we’re nothing.” - Robin, Ken Ludwig’s Sherwood: The Adventures of Robin Hood

“That’s the social justice part of the story,” Theresa said, “That’s the important thing. I mean, it’s a Robin Hood story but it’s also this really relevant modern thing. I mean, that whole idea that we’re either in this taking care of each other, or we’re nothing.”

Come hear Lois and the Lantern’s music in OpenStage’s production of Sherwood, playing until July 24th! For more information about the band and their upcoming album, check out their website.

In this rollicking new take on the beloved folktale, Sherwood is the enduring story of a hero of the people who takes on the ruthless powers that be. With swashbuckling adventure and a romantic heartbeat, this rip-roaring romp through Sherwood Forest brings back the youth in all of us. Laughs, romance and plenty of arrows fly in this all-out comic adventure! 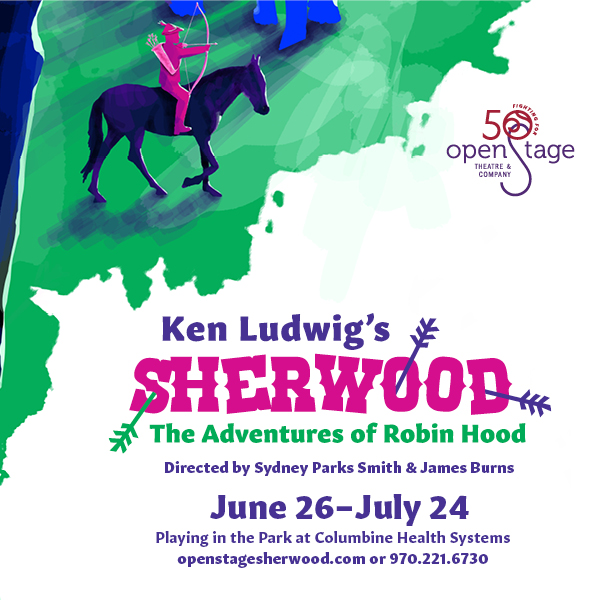