The History of The Mystery

Dramaturgy for Murder on the Orient Express

OpenStage’s production of Agatha Christie's Murder on the Orient Express is currently playing at the Lincoln Center! Today we’re taking a look at the work of a very important member of the artistic team...the dramaturg! Dramaturgs are experts in the study of theatre works such as plays or musicals. It is their job to provide the cast and crew with knowledge and research about the theatrical work in question so that they can be better equipped to do their jobs. Our dramaturg for Murder on the Orient Express, Corinne Wieben, created a packet for the cast and crew to use that provides detail about the world of the play.

Corinne Weiben directed The Mystery of Love and Sex for OpenStage Etcetera and appeared as Dromio of Ephesus in The Comedy of Errors, Elizabeth Proctor in The Crucible and in the ensemble of Monty Python’s Spamalot. Other performances include Fanny in Bas Bleu Readers Theatre’s On the Verge and Clytemnestra in Electra at Front Range Community College. In addition to her Colorado appearances, Corinne has performed with numerous companies in her home state of California, including The Central Coast Shakespeare Festival, San Luis Obispo Repertory Theater and The Great American Melodrama and Vaudeville. Favorite past roles include Titania in A Midsummer Night’s Dream, Becky in Becky’s New Car and Agnes in A Bright Room Called Day.

In the "A Note from the Dramaturg" section of the packet, Corrinne states the following:

"This guide is intended to help you better understand the world of Murder on the Orient Express, including many of the characters and historical references in the play. I’ve included some background on the novel, the characters, and the Orient Express itself. I’ve also included a list of sources if you feel like learning more. With luck, this additional information will make your experience of Agatha Christie’s beloved murder mystery even richer."

Here is some of Corinne’s dramaturgical work for Murder on the Orient Express:

Dame Agatha Christie (1890–1976) is best known as a writer of mystery novels and as the creator of some of the genre’s most iconic characters, including Miss Marple and Hercule Poirot. In fact, her first novel, The Mysterious Affair at Styles, published in 1920, was Poirot’s debut as well as hers. Born Agatha Miller in Devon, England, she married her first husband, Archibald Christie in 1914 at the age of 24. The couple had one daughter, Rosalind, before Archie’s infidelity led them to divorce.

Christie's adventurous married life included tours to Cairo, South Africa, the South Pacific, and other exotic locales that later served as settings for her mysteries. Serving as a nurse in both World Wars, she worked in hospital dispensaries and learned about the poisons that would feature in a number of her novels. Her own experiences riding the Orient Express, including a narrowly-missed blizzard, informed one of her most famous mysteries.

By the end of her life, Christie had produced some 66 detective novels and fourteen short story collections. She remains the most translated single author. Her novel And Then There Were None has sold nearly one hundred million copies, and her play The Mousetrap holds the world record for the longest initial run in history, having opened in London’s West End on November 25, 1952 and run continuously until March 16, 2020, when it was closed down due to the COVID-19 pandemic.

Ken Ludwig has had six shows on Broadway and seven in London's West End, and many of his works have become a standard part of the American repertoire. Lend Me a Tenor won two Tony Awards and was called “one of the classic comedies of the 20th century” by The Washington Post. Crazy For You was on Broadway for five years and won the Tony and Olivier Awards for Best Musical. In addition, he has won two Olivier Awards (England’s highest theater honor), two Helen Hayes Awards, the Edgar Award for Best Mystery of the Year, and the Edwin Forrest Award for Contributions to the American Theater. His other plays include Moon Over Buffalo (starring Carol Burnett), Twentieth Century (starring Alec Baldwin), Be My Baby (starring Hal Holbrook), Baskerville, A Comedy of Tenors, Shakespeare in Hollywood, A Fox on the Fairway, Leading Ladies, and a stage version of Murder on the Orient Express written expressly at the request of the Agatha Christie Estate.

His newest play, Dear Jack, Dear Louise, which tells the story of his parents' courtship during World War II, won the 2020 Helen Hayes / MacArthur Award for Best New Play or Musical. His book How To Teach Your Children Shakespeare, published by Penguin Random House, won the Falstaff Award for Best Shakespeare Book of the Year, and his essays are published by the Yale Review. His work has been performed in over thirty countries in more than twenty languages, and his plays are produced throughout the United States every night of the year.

One of the abiding features of Murder on the Orient Express is the train itself. Trapping the characters on a snowbound train, preventing escape for both victim and murderer(s), is what gives this particular story its extra helping of tension.

Having run its route for over a century, the last iteration of the Orient Express was removed from service on December 14, 2009, a victim of high-speed rail systems and air travel. The legacy of the Orient Express lives on, however, in literature, television, film, and even video games. While the original Orient Express is now defunct, parts of it are still in service. These days, the privately-owned Venice Simplon-Orient-Express (VSOE) offers luxury service to major European cities and the chance to ride and dine in some of the cars from the original train.

“Hungarian, French, Russian, Swedish. What were all these people doing on the same train? Something was amiss!” — Hercule Poirot

Check out the full Dramaturgical packet for Murder on the Orient Express here.

Murder on the Orient Express 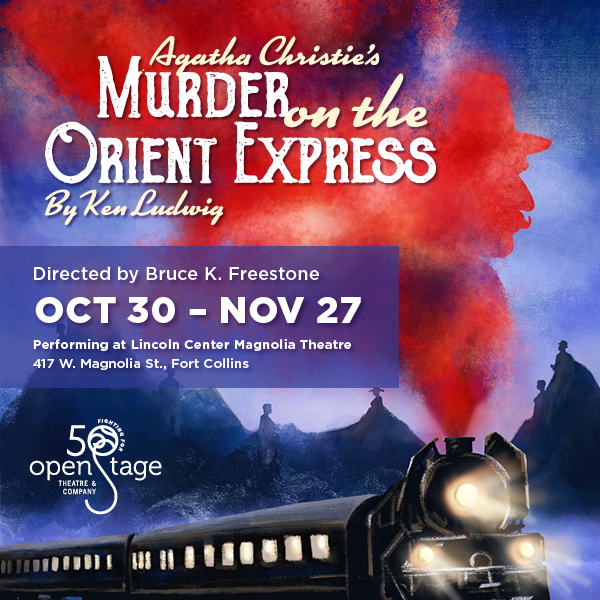