We would love to introduce you to an incredible longtime OpenStage artist, Ambrose Ferber!

Ambrose is a jack of all trades and is playing the talented writer and sweet-talker, Cyrano, in our upcoming production of Cyrano de Bergerac. Get to know Ambrose, his past and future endeavors, and look for him and the most famous nose in history in the coming weeks!

Tell us about yourself; where you’re from, your hobbies, fun facts, or anything that comes to mind!

I was born in New Mexico, though we moved around a fair bit when I was little. We spent a little while in Europe, then the Pacific Northwest, the Bay Area, and then back to New Mexico—to Santa Fe—when I was in fourth grade. My father was from Southern California, essentially, and my mom comes from a very old Spanish family, who have been in Northern New Mexico for hundreds of years. I am Jewish, though it wasn't until I was about 10 years old that my parents figured out that we are not only Ashkenazi on my father's side, but my mom's family were Sephardic crypto-Jews fleeing the Inquisition, though they have long forgotten it.

Professionally, I was a web developer for almost 20 years, focusing on enterprise user experience design and development, until I decided to completely change gears seven years ago and became a teacher. I absolutely loved my job before, but now I can't imagine doing anything other than teaching. I never before felt like my work was important, but now I get to participate in the launching of new adults, and it's amazing. I mostly teach Technology and Engineering classes, but I also have a section in Acting, and I'm the head Speech and Debate coach.

In my spare time, I'd rather be skiing than just about anything else, but I enjoy anything that also includes my family. I like to cook, though very amateurishly, and I like to play with the geek stuff that I've built both of my careers around. Hiking, backpacking, surfing (not very often), reading, movies, and games are all favorites as well.

Can you tell us about the work you're doing outside of OpenStage and any achievements you have been recognized for?

As I said, I am a teacher now, and I work at a small independent school called Santa Fe Prep, in Santa Fe, New Mexico. It is, incidentally, also the school at which my wife and I first got together, both graduated from, and now send our two kids to. I teach Technology and Engineering classes to 7-12 graders, as well as some acting, stunts, and fight stuff. I am also the head Speech and Debate coach, and this last year I won the 2021-22 New Mexico State Debate Coach of the Year. My greatest professional achievement also came this last year, winning the Jay Shelton Award for Teaching Excellence. It's a peer and student recognition honor, which therefore means more to me than I can articulate.

Theatrically, I have been performing Shakespeare off and on with the International Shakespeare Center in Santa Fe for the last few years, and not doing much else on stage. I have, of course, been doing lots of fight direction all around Santa Fe. 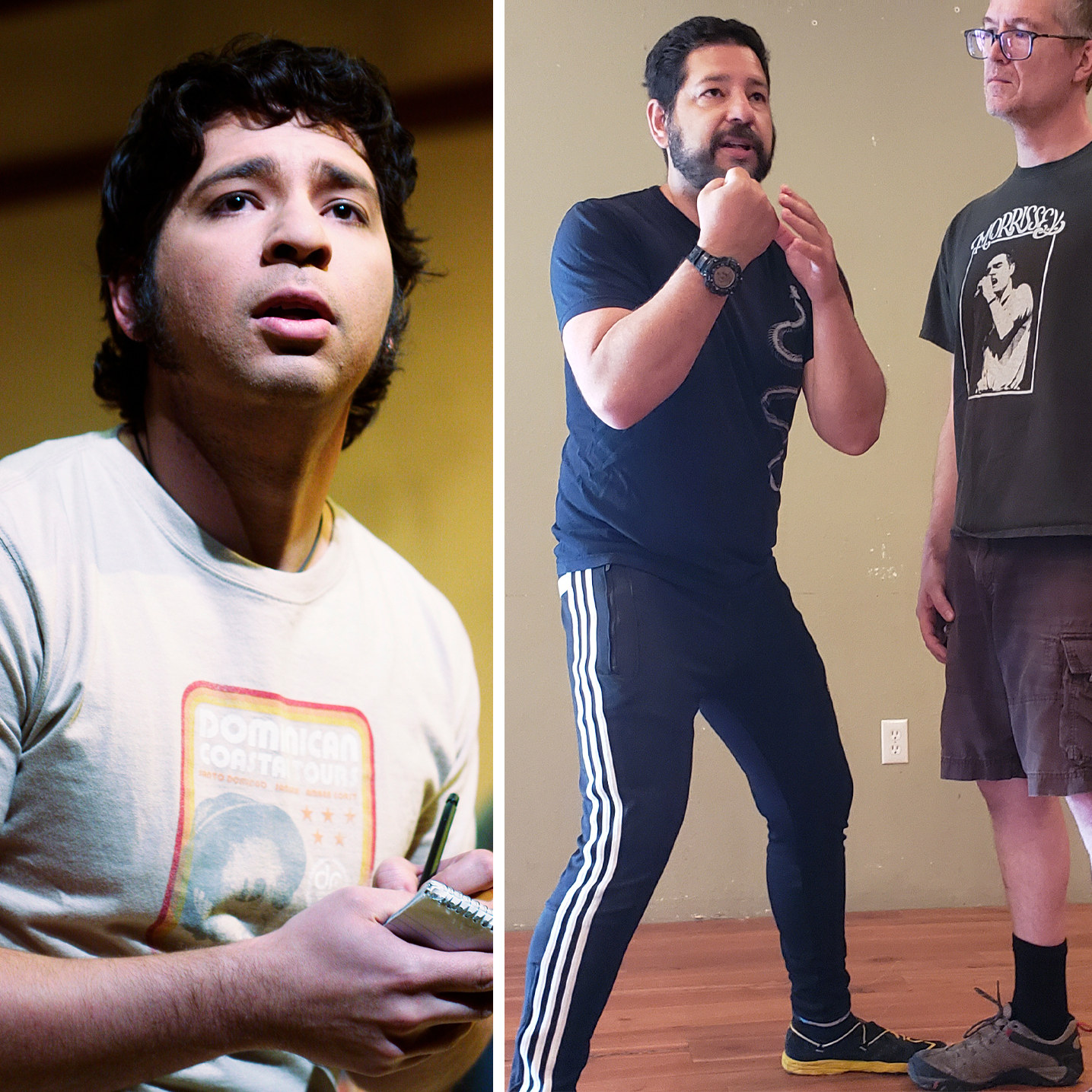 How long have you worked with OpenStage?

My first season with OpenStage was the 2000-01 season, where I was in Picasso at the Lapin Agile and Fortinbras, but I was only with the company for about 5 years when we decided to move back to Santa Fe. So it's been 17 years since I performed an OST show, though I have been back a few times over the years to fight direct some shows.

What would you say is your favorite production that you have worked on so far with OpenStage?

That is a rather difficult question. Picasso will always stand out because it was my first show, and, of course, it's PICASSO. The Drawer Boy was an unparalleled experience: small cast with two unbelievably talented actors— Bob Holt and Robert Reid— and directed by Judi Allen, who is directing Cyrano. That was just an incredible show, from the script to the process, to the direction, to the set, to the honor of learning from those other two actors...all in all, just one of those performances that stays with you forever. We won some Opus awards for that, too, including Best Show. Of course, Henry IV, Part 1 is the show that introduced me to my stage combat mentor Geoff Kent and to fight direction and staged violence, which has become an incredibly important part of my life and career now. Coming and fight directing Sherwood last year was not only a blast and a half (what a cast and crew!), but also led to Cyrano. We're not in production yet, obviously, but it's important to say that this has already been simultaneously the most difficult and most rewarding work I've ever done as an actor. I'll let you know in 6 weeks if it's my favorite production I've worked on with OpenStage.

What is your favorite thing about acting and working behind the scenes of OpenStage productions?

Bar none, the people. OpenStage occupies this interesting place where it's not full-on professional, Equity theatre, but clearly, it is far beyond community theatre. It would be so expected for an environment like that to be pretty cutthroat and even hostile, especially for someone coming from the outside to play a big role. True, I am not unknown to the company, but I have been away long enough that most of the faces are new, but any fears I had about not being welcomed were completely groundless. The people of OpenStage are creative, talented, and professional, but also supportive, warm, and generous. I love getting to work with this creative team!

How did you come about playing the role of Cyrano?

I first read the play (Hooker translation for those who care) with my father when I was eight years old, and completely fell in love with it. We watched all the movies together (including Roxanne), re-read the play together, including other translations, and, over the years, talked a lot about how I would play the character if ever the opportunity arose. He always wanted me to play it, but it never happened— it's just not a play that people produce very often. Last summer, when I was in Fort Collins for Sherwood, was when Sydney first approached me about the idea of playing Cyrano. We met with Judi and talked about it at length, after which they offered me the role. Privately, I was absolutely shaking at the offer. I cleared the idea with my family and my school, officially accepted the role, and immediately had a breakdown: "Cyrano! Woo-hoo! Yay! Oh my God! Now I have to play Cyrano!" One of the best moments was getting to tell my pop that, at long last, it was finally happening. Unfortunately, as Cyrano himself says, "Fate loves a jest," and my father passed away in early October of last year. People have said that he'll be there, in the park, as we perform, and that might be true. But I won't get to talk to him about it afterward. I'll be thinking of him, though, on stage. 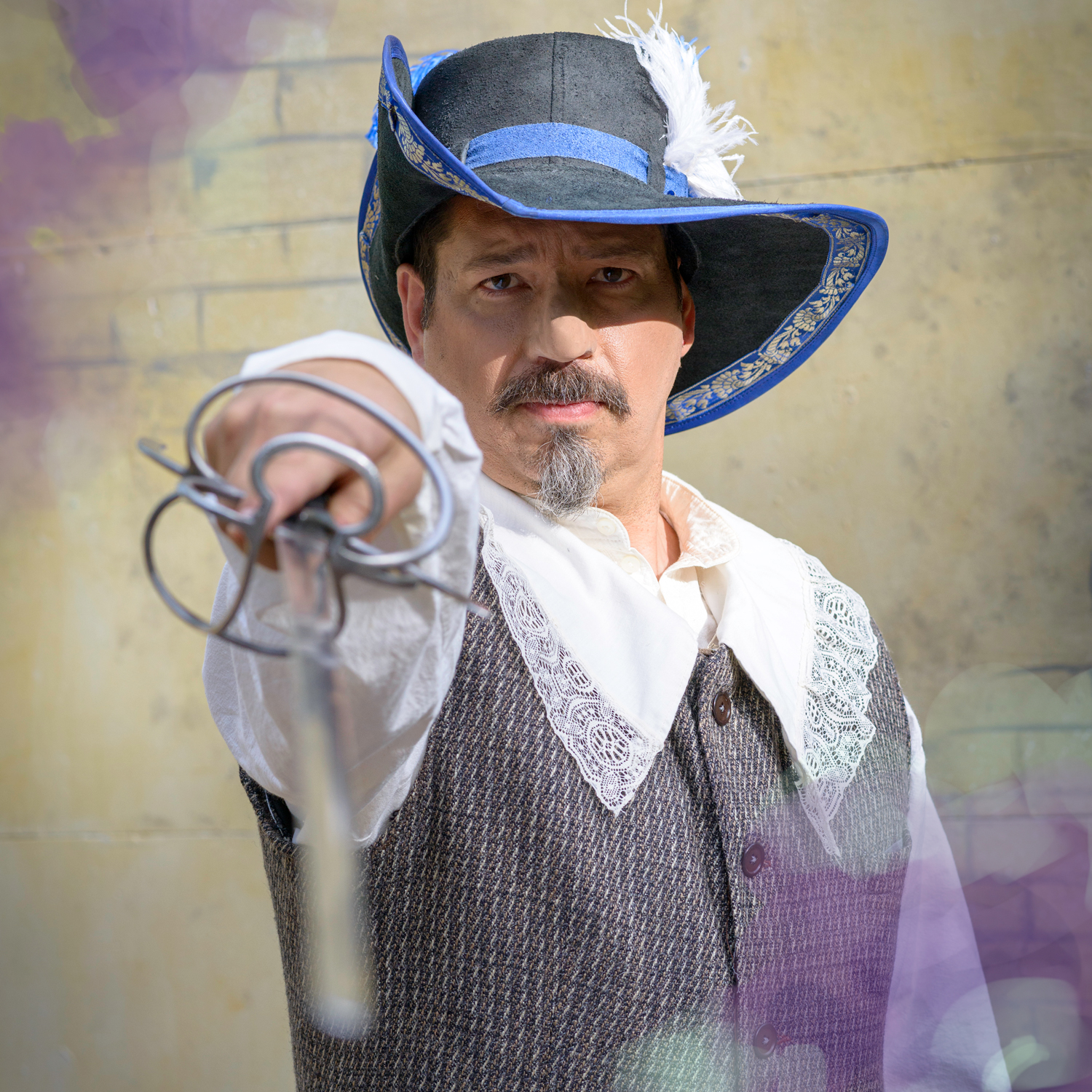 What are you most excited about playing the role of Cyrano?

This is unanswerable! Playing Cyrano, as I have learned over the last weeks, is all about this massive whole which is so much greater than the sum of the parts. There is a swashbuckling-ness to it, as everyone expects, but rooted in reality. It's so important that Cyrano himself is vulnerable and real and human. And I share a lot with him, personally, in regards to self-esteem and confidence, and an ability to project something very different from what is going on inside. It's like he and I are going on this journey together.

What can audiences look forward to in Cyrano de Bergerac?

Being deeply and profoundly moved. It's funny, and has all that stuff you really want in an outdoor summer show: laughs, romance, magic, swordplay... but, at its heart, it is tragic and sweet and touching.

Do you have any upcoming projects after Cyrano?

I do not! Honestly, taking two and half months away from my family, my home, my school, and my life is going to take a while to recover from. This is also the denouement of a lot of things, emotionally, logistically, spiritually, and professionally, and I will want some time to process the experience. I've even been playing, in my head, with the idea of not performing anymore after this, but really focusing on teaching and fight direction. I would also like to get certified in Intimacy Coordination, which I believe is one of the greatest developments in theatre in a long time. I suppose it is worth saying that the plan right now is to return to OpenStage next year to fight direct the summer show again. 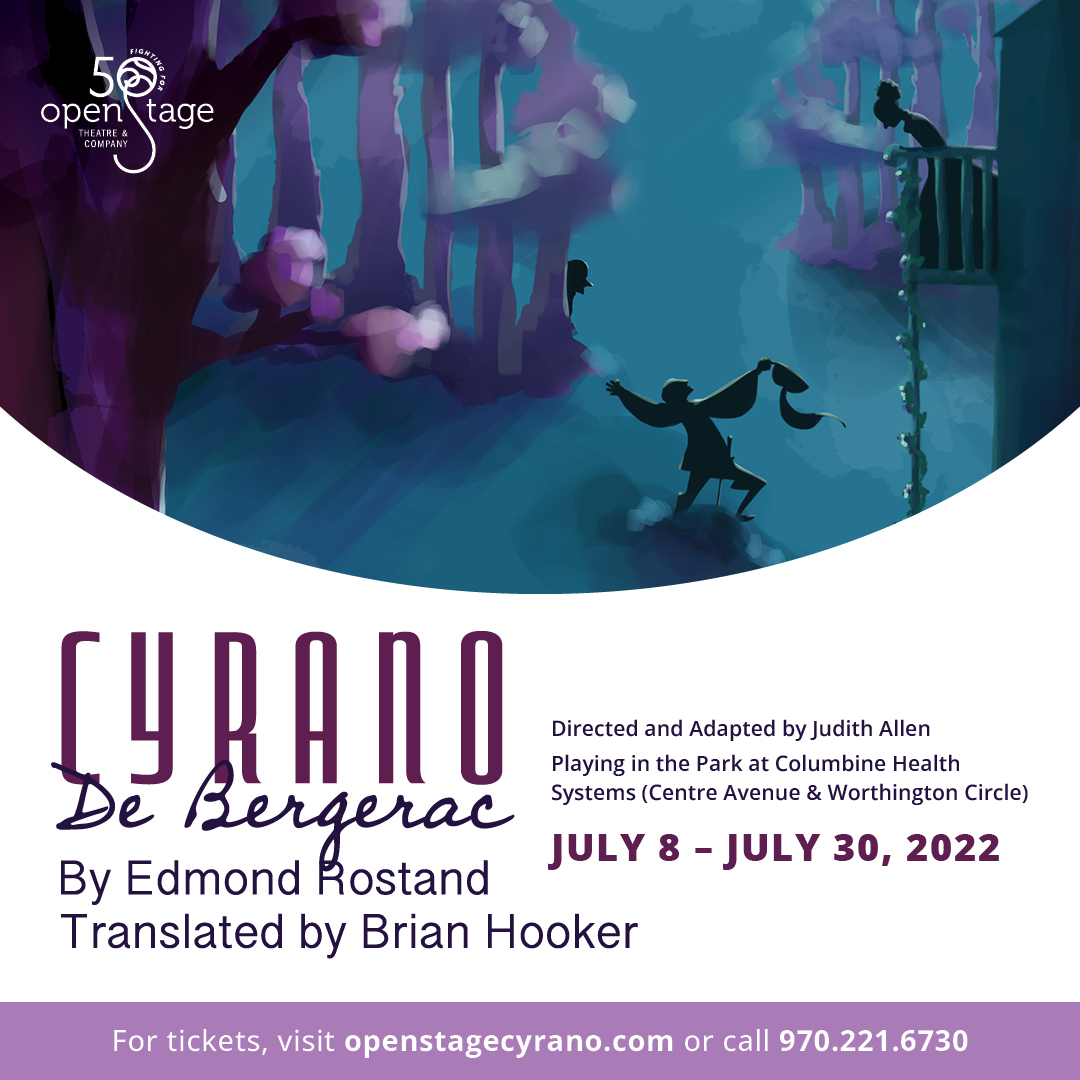 Directed and Adapted by Judith Allen

A sophisticated turn of phrase ... or ... a pretty face? Which will Roxane choose?

Larger than life Cyrano—soldier, philosopher, poet and adventurer—is in love with the resplendent Roxane. Hampered by his self-perceived lack of beauty due to his absurdly large nose, Cyrano offers handsome fellow cadet, Christian, his poetic mastery of language to woo his beloved Roxane. As she falls under the spell of Cyrano’s beautiful letters, believing they are coming from Christian’s beautiful face, war propels the love triangle beyond whimsical antics into love and heartbreak. Full of wordplay and swordplay, as well as the most famous nose in history, Cyrano is a night of comedy, mistaken identity, and romantic tragedy under the stars. Walk-in, bike-in, or drive-in! Featuring nightly food trucks.